Proposition #2 is a measure on the December 5, 2020 ballot that would cut the New Orleans Public Library's budget by 40% for the next 20 years. 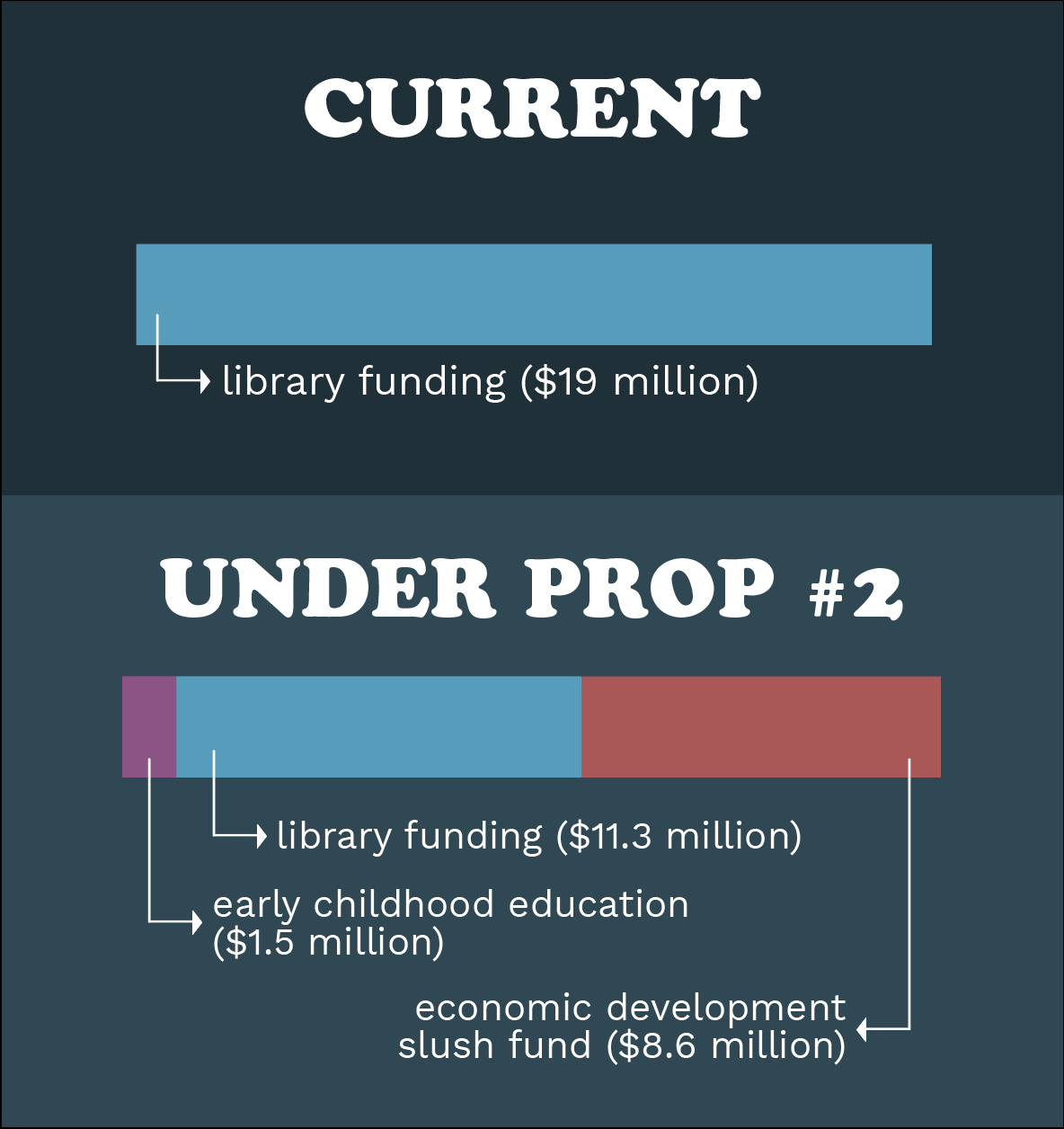 What exactly does proposition #2 do?

The New Orleans Public Library is funded by property taxes — also known as millages. Prop #2 would affect one millage in particular, which accounts for a little over half of the NOPL budget with a millage rate of 2.58, equivalent to about $10 million in 2020.

If proposition #2 were to pass, this particular millage would be eliminated. In its place, prop #2 would create a new “library and early childhood education” fund. This fund would receive a much smaller millage, with a rate of 0.987, or about $3.8 million in 2021. 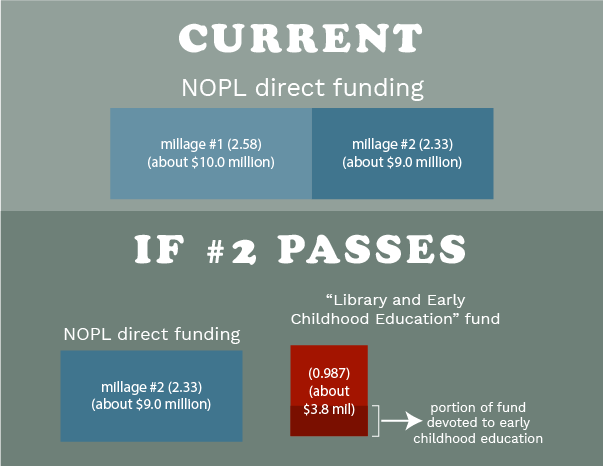 No. The three propositions on the December 5 ballot collectively keep current millage rates exactly the same.

So what’s wrong with proposition #2?

We feel there are several ways in which prop #2 works against our community interests.

We’ll go into more detail about each of these points in this factsheet. But here’s the bottom line: prop #2, along with the rest of the measures on the December 5 ballot, is a raw deal for voters. There’s a reason that New Orleans has overwhelmingly supported the current millage twice before. We love our libraries, and know they make for better, stronger communities.

On December 5, we’re asking voters to continue funding their libraries and to vote NO on proposition #2.

Where does all the money cut from the libraries go?

Each of the three propositions on the December 5 ballot would create one new fund. Let’s take a look at the current millages in question, and how money would be allocated to each of these new funds. 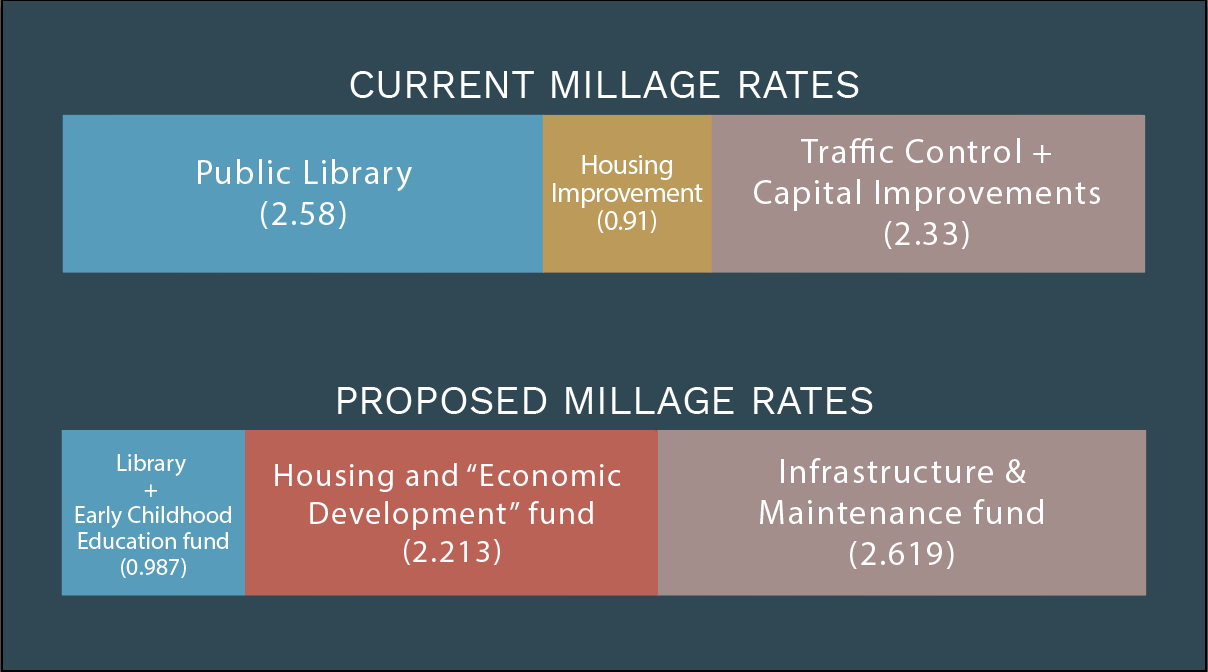 There’s a lot happening in this image, but we want to point out the two biggest changes: the huge cut in library funding, and the giant new “economic development” fund.

How exactly would these funds work?

That’s our question! We’ve gone over every proposal in favor of the December 5 propositions we can find, and we are yet to find any details clarifying exactly how these funds would work.

Who would control these funds? How would funding decisions be made? What counts as economic development? How do we make sure any projects undertaken are truly in the community’s interests? Will there be community oversight? How will decision-makers be held accountable? What if taxpayer funds fall into the wrong hands? No one seems to know the answers for sure.

Advocates for proposition #2 say they have the best of intentions, and we believe them. But the unfortunate reality is that opaque funds like these seem to invariably open the door to shady, back-room dealings. New Orleanians are all too familiar with the opportunistic predators who use private-public partnerships as a means to extract resources from our communities.

Would the NOPL lose its independence?

We feel that this has to be a concern. Currently, the NOPL receives their funding directly from taxpayers, and their only agenda is to serve the community.

Could the fund created by prop #2 change this? It’s hard to say when we don’t know precisely how the new fund would work. But it’s easy to imagine a scenario where outside parties wind up dictating how the NOPL must spend its money. It’s possible such fears are unfounded, and that these new funds would be sensibly and impartially governed. Without further information, however, voters have no way of knowing that for sure.

The reason we have dedicated public money for the NOPL is because libraries are a public good. It's an investment in a public institution which is available to all people. We've seen the devastation that cuts to public goods have had in this state. Dedicated library funding is a guaranteed way to protect the public good. The library having a dedicated millage means that you get to decide how much money the library gets, and it only gets spent by the library.

How else would these cuts impact the library?

The NOPL hasn’t released a reduced budget based on prop #2 cuts, so we can’t know the immediate impact with certainty.

Here’s what we do know: A 40% cut to the NOPL budget is massive. After speaking with many librarians, community organizations and budget experts, we can confidently state that proposition #2 would lead to reductions in services, personnel lay-offs, and branches closing. In recent years, NOPL has spent 97-98% of its operating budget to keep its 15 branches running. Continuing to do so with severely reduced funding is completely unfeasible.

Advocates have claimed that prop #2 would result in no tangible changes to library services. But folks familiar with the NOPL budget say this claim is absurd. There can be no doubt that these budget cuts would lead to reduced services and personnel.

Would prop #2 bring the library’s budget in line with their true expenditures?

Some of the claims being made in favor of prop #2 can be confusing. Some are in grey areas, or are perhaps a matter of perspective.

So let us be clear: This one is just plainly false.

Like any well-run department, the NOPL offers services based on their budget. With more funding, NOPL could offer more services and upgrade facilities. Small budget cuts could perhaps be offset with hiring freezes or modest reductions in programming.

But the notion that cutting NOPL’s budget by 40% in any way aligns with their true expenditures could not be further from the truth. In recent years, NOPL has spent 97-98% of its operating budget to keep its 15 branches running. Continuing to do so with severely reduced funding is completely unfeasible.

What about the library’s rainy day fund?

Imagine you manage to save a half-year’s salary. Your boss hears about this, and responds by cutting your salary by 40% for the next 20 years. Your savings aren’t going to get you very far!

The library currently has a rainy-day fund of about $11 million — equivalent to about six months of funding. This fund does not reflect a budget surplus. NOPL built up this fund as a matter of basic financial prudence, after Hurricane Katrina demonstrated the need for emergency funds.

In order to rebuild and renovate several library branches, extend hours, and hire more staff, NOPL requested an additional 2.5 millage from voters in 2015 — which the community overwhelmingly supported. NOPL finally returned to pre-Katrina levels of services when the Nora Navra branch opened in 2018. With 15 branches, longer hours, more staff and programming, NOPL had its highest circulation numbers ever pre-COVID in 2019.

So what about funding early childhood education?

We’re all for it! But proposition #2 isn’t the way to do it. For every $5 cut from the NOPL budget, only $1 goes to early childhood education. The vast majority of it winds up in an “economic development” slush fund.

We’d like to see even stronger funding for early childhood education on future ballot measures, while continuing to fund our libraries. 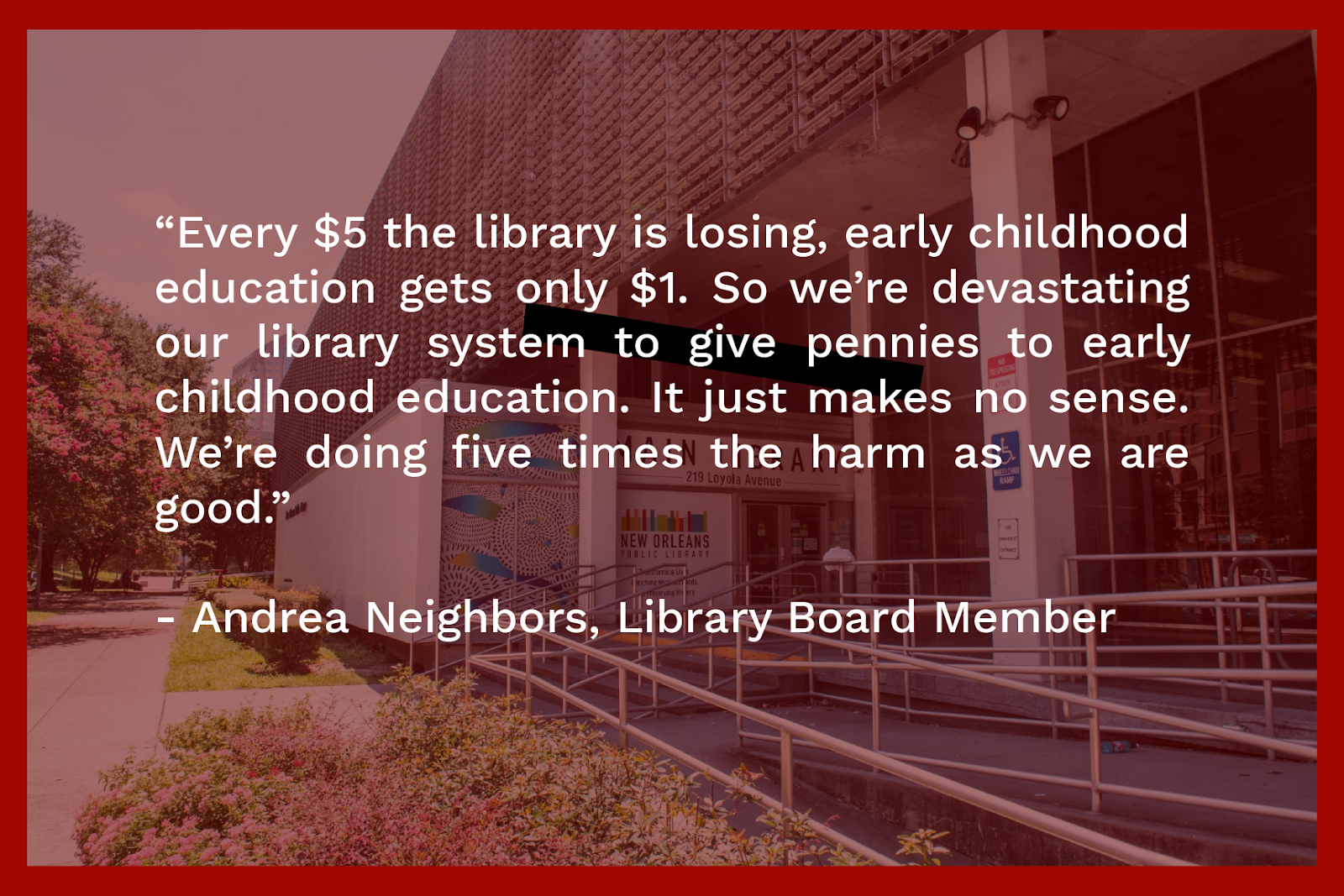 What happens if proposition #2 doesn’t pass?

The current library millage runs through the end of 2021 — giving us over a year to pass a better alternative.

The Save Our Libraries, Vote NO on #2 coalition is committed to obtaining a better outcome for our libraries and for our community. If the voters reject proposition #2, we plan to continue the fight, and work together with early childhood education advocates and a broad coalition of stakeholders to come up with a plan that will continue funding the NOPL.

Is this hard to understand, or is it just me?

It’s not just you! There’s a lot of moving pieces to this. Ballot language on amendments and propositions can feel intentionally hard to understand, and it doesn’t help that some have tried to frame prop #2 as a vote FOR libraries.